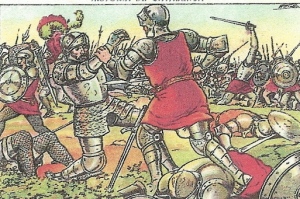 After some 30 years, Martha decided to dig out some papers she had found in the house after she bought it. From the box stuffed in the back of a closet, Martha and Fabián pulled out a stack of yellowed tax receipts, three schoolbooks from around 1930, and old family photographs. While flipping through the schoolbooks, Martha came upon a brightly colored cartoon card of knights in coats-of arms fighting.  It was an imagined scene from the 16th century in which the Catalans battled against Francis the 1st, a French King, in Pavia (now Italy) and won.   On the back was an advertisement for a Barcelona chocolate, Xocolata Juncosa.  Martha was astonished when she realized this was the kind of card what one of the interviewees had mentioned when recalling when she first heard in July of 1936 that war had broken out:“Great! Chocolate candy!

This entry was posted in Uncategorized. Bookmark the permalink.